We in Britain, it has to be said, do not handle extremes of weather very well! Usually a bit of snow brings the country to a stand still so, unsurprisingly, when there is a shit load of the white stuff the consequences are bad. There have been no flights to North Carolina for two days. After sitting on the tarmac for 3 hours waiting to be de-iced and parked following a flight from Germany on Friday Hubby ventured to Heathrow this morning expecting to fly back to the states at 12pm (mad dogs and English men!). Astonishingly, he boarded on time although he sat on the tarmac again for three hours before finally taking off. Why do airlines do that? Why board? He was lucky in the wide scheme of things! He flew! I may not be so lucky to fly back on Wednesday with more snow forecast. 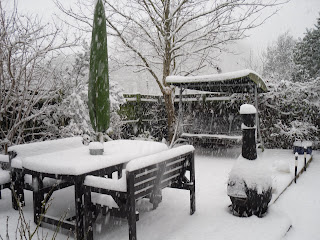 You may think I would want to be snowed in. Most of me does want to be so I can stay here a bit longer before returning to our voluntary exile. I have had a great trip home but the snow has marred it. I couldn't get to a concert at Birmingham Cathedral on Saturday. Medieval Baebes were crooning. What rotten luck to miss that! (Although for compensation we sat in a local pub drinking mulled wine all afternoon) We had an early family Christmas dinner on Sunday but half the family couldn't get here because of snow (but it was white- I seem to always look at the negatives but it has been pointed out that I got my white christmas...magical, if not quite the one you dream of - which never has parents stranded and unable to pull a cracker- something my Mom and Dad rarely fail to do in their own ways)  The kiddies couldn't visit their old friends today and were very upset. My friends and family couldn't visit me or me them and I have half my presents undelivered. I am perhaps grateful that not all gifts have been delivered to me! I have been surprised by the gifts bestowed. I can just imagine the questions at the airport... "are you carrying anything from anyone else?" ... I have had to open the gift wrapped presents in case they are banned from aircraft! Apart from a particularly vicious perfume most gifts could not be classed as offensive weapons. The biggest challenge, other than the snow, I face in getting back is getting all the presents in my suitcase and not being charged for access baggage. The sizes of the presents are slightly ridiculous. I don't know what my dad was thinking.. a Super Mario game for the Wii - great... but TWO Wii wheels and FOUR hardback annuals for the kids??? That weighs. At this rate I might have no room for my own contraband - I have to at least try to smuggle an M & S Christmas pudding into the states for Christmas day.
I am always pissed off that they don't weigh me with my suitcase. Why am I only allowed the same weight in luggage as the fat bastard behind me? I can see Ryan Air catching on to this. The more you weigh the smaller your suitcase has to be! Call me fattist but it seems fair to me.
All of that aside I still want to go back to that strange place I now call home. Hubby will hopefully be landing later today and I miss him already. He is the most familiar thing to me in that strangeness (bit of a turnaround given he used to be the strangest part of my life before America!)  I also have an obligation to my cats. After all they were as pissed off as I was to have to leave England in the first place. They had even less choice than me too. Most importantly we need to be back for the Kiddies Christmas present. A huge surprise that they didn't know about at all...  until someone just called by to wish us all a safe journey home, a happy Christmas and a great trip to Disneyland on Boxing Day!
Cheers!
Posted by Stranger in a Strange Land at 6:22 PM