Disneyworld is full of mottoes. One being 'the magic never ends'. I wondered if that is because it never really begins. Walt himself said 'if you can dream it, you can make it happen'. He clearly never had the sort of dreams I have after a late night slab of Cheddar. Weird! I wouldn't want those dreams becoming a reality! As it happens, for the last 3 nights I have had a recurring dream of standing endlessly in queues. Nightmare!

I remember hearing Chris Evans say that once you were on the travelator at the airport you had reached the most exciting bit of the holiday and you may as well go home because it doesn't get any better. I'm not sure when my travelator moment happened for me during my Disney experience. Maybe it was the moment we told the kids on Christmas day. Maybe that was my moment of Magic...
Upon arrival in Disney we set off - armed with our personalised Disney maps. I had done my homework. I was ready to 'let the magic begin'. I have to say Disney were up against it with me. I expected not to like it but their job was made harder by it being the coldest 3 days in Orlando on record (according to a bloke on the bus). It was so cold. We did have the advantage of not having to queue for the water rid 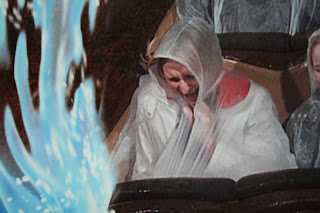 es. No one else was stupid enough to pay the absurd amounts for the water ponchos or to get wet in freezing weather. I got the biggest splash. I think I deserved it! One night we got back to the hotel to find a family in the outdoor swimming pool. They were, of course, English - Northerners trying to pretend it was Florida weather! It clearly caught lots of people out. There is no way Disneyworld flog that number of hoodies normally!
My Son had a magic moment when he went on some of the big boy rides (44" allowed). He was distraught when he couldn't go on others because he was 4" too short. He even tried standing on tip toes! He also had a moment when he saw a Disney Character (rare in Disney unless during a parade or at the end of a 30 minute queue). He ran to give 'Stitch' a hug, only to be body blocked by a 'guard' and told that they didn't have time. Magic Disney moment. Disney is full of overwhelmed and under-impressed little kids. All they want is to hug their heroes without waiting in line while the excitement dwindles! After the first day my son asked if he could stay at the hotel and play on his new 'intendo'!
My son gave some onlookers a more sickening jolt than any ride when he fell off a wall and thudded into the pavement head first. Ironically that was one of my magic moments. The staff were faultless. They called paramedics who confirmed that he had no brain to damage in the first place. They gave us a pushchair for the rest of the evening to push the invalid around. A freebie in Disney! Truly magic.
My daughter had a moment shattered by me. We went to eat in a mock hotel. She was excited and asked if people were staying in the rooms. I forgot the whole 'suspension of disbelief' thing and told her they were fake doors. How to ruin an illusion!
I found Epcot weird. A mock up of places in the world. Why? go to the real places instead! And who chose the places? Why was Norway there? Not top of must see destinations. I have to confess to eating fish and chips in little Britain at the Rose and Crown Pub... Not because I am an anglophile and that sad but because by the time we had sorted My son's head out we were looking at 90 minute waits for food so take away was the best option. Talking of 'little Britain' I think Hubby had a moment when he recognised Matt Lucas on the log Flume (it was our last day and the temperature was warmer - I wouldn't dream of suggesting Matt was as stupid as us going on there in the Arctic temperatures!). I wondered if he had to queue! If anyone has Matt's email - forward him the blog and ask him!
There were things I really hated and knew I would. I hated the queues... especially for food in the evening. I hated the shuffle we had to do to get anywhere. On the shuttle bus to Epcot they suggested we find a 'viewing platform' 45 minutes before the firework show. 45 minutes standing looking at nothing so you would have room to stand?! I cant work out if it was their little joke when they said 'It is all waiting for you at Epcot'... a description of our day rather than a promise!
I tried to avoid the queues with Fast passes. Where does it say that you can only have one pass in any two hour period? I didn't find this out until I had run half way around a park to get our second ticket of the day! I found out at the end of the fast pass queue that I couldn't have one. The alternative was a 90 minute wait to shoot Buzz Lightyear for 5 minutes. Magic!
There were things that I loved. The shows are just spectacular. The Lion King was amazing, as were the stunt cars. I was bizarrely moved to tears whilst watching Mickey's Once Upon a Time Christmas Parade. I have no idea why but it overwhelmed me. Maybe that is the magic of Disney. It certainly made hubby cry when he added up the cost. Disney is a slick money making machine! (I hated the merchandise at the end of every ride!) They certainly know how to put on a firework display and as much as I disliked the mock world of Epcot, the firework show is something I will never forget. That also moved me to tears. Maybe I am menopausal!
So - I can tick another 'Seen it- Done it' Box. I have made the pilgrimage to Disneyworld in the promised land of milk and honey (well, more oranges really). Perhaps - just like a pilgrimage everyone should do it once in a lifetime! Personally, I don't get it but enough people do! I guess if religion is the opium of the masses, in the Church of Disney, it is sugar coated with a massive following all waiting patiently behind the parade ropes to 'let the magic begin'.
Posted by Stranger in a Strange Land at 4:09 PM

Email ThisBlogThis!Share to TwitterShare to FacebookShare to Pinterest
Labels: Disneyworld