If asked ‘where are you from?’ which is frequent in these parts – if they haven’t already assumed I am Australian (or once it was French) I say ‘’.  When I am asked my nationality, it is British. For me you cannot be one without the other. I was in for Day – not that you would notice it. There were not many English flags waving. The shops were swamped with Union Jacks in preparation for the Royal Wedding. I loved seeing the Union Jacks everywhere and purchased quite a few souvenirs. I was asked if I would be celebrating Day. Given I am not religious there should be no reason for me to acknowledge it or him but it is there to celebrate being English, so why don’t we?
St George was from Syria (St Patrick was probably English, St Andrew was from Galilee and only St David was from the place for which he is canonised!) Perhaps if we want to celebrate being English we should choose a different figurehead to represent us. As a largely secular society, or certainly one that is a big boiling pot of different faiths and religions, St George doesn’t cater to all tastes. Any Suggestions? Billy would get my vote! Shakespeare not Connelly, Idol, Eliot or Bragg!
The other issue on day, apart from George, is the English flag. When I left last year, I had a surge of patriotism. I wanted to wave the flag for the first time in my life. I could have chosen the red cross on white and had ‘Made in ’ tattooed on my forehead like the morons who favour the English flag but I opted for the Union Jack. More stylish for a start! In the week before I left, I packed very tasteful Union Jack stuff. A retro rug and cushions from Debenhams, my aunt got me a door stop from John Lewis and my sister and mom gave me a Union Jack charm for my bracelet. Had I not been leaving home I would never have had such stuff. American’s have flag poles outside their house with the American flag flying proudly. You can buy it all at Wal-mart.  Why don’t we?
If we wanted to celebrate being English as well as British,  we have to reclaim the English flag from its current racist, bigoted, BNP voting, council estate scuttering, benefit scrounging, football hooligan waving supporters.  I might be generalising a bit but I see nothing positive connected with the flag. It has been hijacked by arse ‘oles! I saw a YouTube clip of some vile twat (hopefully the offensive language gives the appropriate image of him) from ‘the English Defence League’ talking of the ‘muslamic’ threat. He could barely speak coherent English, yet he was actively involved in politics, the sort that involves zero IQ and violence! It was more than depressing! Had he been mispronouncing a salad dressing it might have been funny. The ELD make me ashamed of the flag I should be proud to fly. Journalists who have covered reports on the ELD have received death threats. It is a good job ELD members are unlikely to be able to read – me and my blog are hopefully safe!
We should also get some enthusiasm for our traditions. Americans are buzzing about the forth coming royal wedding. I was hard pushed to find anyone to have a positive word at home other than being glad of an extra day off! Love ‘em or hate them we should be glad that we didn’t chop their heads off and make a republic (look at , , , …). If nothing else the royals are a tourist attraction and the envy of the !
There are so many amazing things that are worth waving the flag for. One of them is our multi cultural, free society that is the envy of so many other countries. I was struck by the beauty of when I visited last week. For those of us who sang ‘’ in primary school, we’d all agree on the perfect English anthem (with a bit of rewording to take God and violence out of the equation). The greenness, the winding country lanes, the magnificent and varied landscape, the depth and wealth of history in every city, town and village that again is the envy of Americans. I wish we English had the same enthusiasm for all things English.
We don’t have to define ourselves by saying what we are not or by putting other cultures and beliefs down! Underneath my ‘candid’ look at how strange my new life in America is, is my recognition that my life before, in the UK, was good and there are things special and unique to that which I miss and that define who I am – roast Sunday dinners, Ribena, tea, crappy weather, fancy loo rolls... if you are English… or British, none of it requires any explanation! 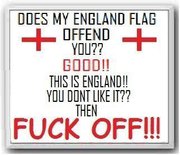 I found the picture for this post on facebook quite by accident. It was someone’s profile picture. They had friends! I do not know the person. I shouldn’t judge! The sentiment in the picture ‘Does my flag offend’ sums up what is wrong with the English flag. The sentiment is that anyone who doesn’t like it must be a foreigner who should go back to their own country. I don’t like what the flag has come to represent for me and I wish I could fuck off back to my own country but it would be a nicer place without the flag wavers.

What we need is proud patriotism not aggressive nationalism!
Posted by Stranger in a Strange Land at 9:42 AM