I picked up a magazine this morning; ‘Our State, ’. It was the first time I had seen it. I flicked through and an article caught my eye. One of the emboldened excerpts said ‘The poke can cure more acute ailments than homesickness”. I had to buy it, suffering from acute homesickness and having been poking a lot recently, I thought I should find out more.
Poking has been on my mind. Before you form an inappropriate opinion I mean poking on Facebook! A poke is apparently a way to say ‘Hi’. Here was me thinking for years it was something so much more meaningful! All those pokes in the past that I have regretted – were nothing more than an over zealous ‘Hello’! I’m a relative newcomer to Facebook and succumbed when I was press-ganged to join as part of a school reunion In June 2009. I hadn’t poked any old school friends since the reunion. The opportunity didn’t arise on the day of the reunion although it was mad how people were quite happy to confess how much they had wanted to poke me 26 years before. They didn’t mention it at the time! I have since found out it is rude not to poke! Rule is, if someone pokes you- you poke them back (unless you don’t know them! Don’t poke strangers! They can see your profile – actually they might see a whole lot more! My mother should’ve taught me that!)
I have recently embarked on some poking activity. I’m not sure what polite poking etiquette is. Do you poke back straight away? Allow a time-lapse so that you don’t give the impression you are lurking, waiting for your next poke? Or do I just need to chill? Pokes should ease tension, not cause it! I have realized that a good morning poke back is better than a poke in the back in the morning! Perhaps I am over thinking it but Facebook is strange, it offers me social connectivity whilst being socially isolated. I wondered if I was spending too much time on Facebook. I took The Facebook Addiction Test (FAT) to see if I was.
It asked questions like
How often do you find that you stay on Face book longer than you intended?
How often do you neglect household chores to spend more time on Face book?
How often do you check your e-mail before something else that you need to do?
It wasn’t looking good!
But then some questions such as:
How often do you prefer the excitement of the Facebook to face-to-face friends?
How often do you fear that life without Facebook would be boring, empty, and joyless?
How often do you block out disturbing thoughts about your life with soothing thoughts of the Facebook
made me realize that I don’t overuse Facebook.  It really doesn’t do that for me! Nothing can replace the real thing! I scored 21 in the FAT test. This was just into average- almost below average use!    (20 - 49 points: You are an average Facebook user. You may surf Facebook a bit too long at times, but you have control over your usage)
I am on the other side of the world.  I am socially isolated in this strange place. I think a score of 21 is surprisingly low! Facebook offers such a great link to home. I confess the first thing I do in the morning is turn on Facebook, Check emails, my blog and skype – well almost the first thing….
The time difference means that if I send anything in the evenings you buggers are in bed so I don’t get any responses till morning! I would hate to wake up to nothing! It all makes me feel like I still belong, so I am so glad I get poked on a daily basis. Look forward to it even! If I am over-zealous in my return pokes hopefully I won’t get a bad reputation! 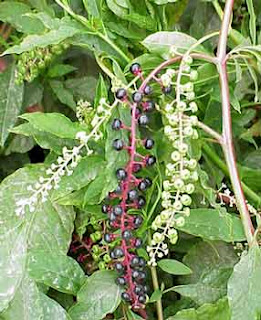 The magazine article was about a different sort of poke. Pokeweed: ‘a gangly plant, beanpole skinny at the bottom and topped off with an unruly wig’, considered a weed here but grown in for their ‘eye-catching quality’! We admire it, we dont try to eat it!  It is poisonous and you can die from eating it yet it is recommended here, perhaps as a side to grits, as long as you boil it two or three times. It is ‘tastier than turnips’…. and we all know how tasty turnips are! It allegedly wards off such ailments as syphilis, hog cholera (!) and ‘the seven year itch’. I can see how a poke might do something for the seven year itch. Not sure it would cure it and it might even cause syphilis!
One commercial gardener said in the magazine article, ‘I have a poke in the middle of the flowering plants section…they’ll point and go, ‘look at that’. I bet they do. You just don’t expect to see a gardener having a poke in the flower bed!
They have recipes for Poke Salad in and other southern states. It is poisonous and ‘ingestion can cause severe stomach cramping, nausea with persistent diarrhea and vomiting, sometimes bloody, slow and difficult breathing, weakness, spasms, hypertension, severe convulsions, and death. Severe poisonings have been reported in adults who ingested mature pokeweed leaves and following the ingestion of tea brewed from one-half teaspoonful of powdered pokeroot’
I'll stick to PG Tips!
It is claimed the poke weed cured homesickness because soldiers in the American civil war used the poke berry juice as ink to write home to loved ones. I guess Facebook pokes are the modernd day equivilent! I think I’ll give the North Carolinian poke a wide birth. My Facebook pokes from home keep the homesickness at bay but there is only one cure for such an ailment and that is the real thing…
Do I have to explain? I mean home is the only cure for homesickness, not a real poke!
...although - it is rude not to!

Elvis knew all about southern Pokes!

Posted by Stranger in a Strange Land at 9:54 PM