What did Pink Panther say when he stepped on an ant?

I was reminded, this weekend, of the dear little dog I had when I was growing up called ‘Happy’. Her favourite things were chocolate, beer and fighting! She was a vicious, mean little Jack Russell who would bite you given half the chance. Her name wasn’t a misnomer. She was truly ‘happy’ and never more so than when causing someone or something else some misery.  Old ladies would hit me with their walking sticks when my dog had attacked their little pouches unprovoked. I would desperately try to get her on her lead as large Alsatians approached. Their owners would call out ‘Don’t worry, my dog is friendly’. It was never their dog’s temperament I was worried about. It was their dog’s safety and welfare. I’ve seen her make a Rottweiler cry. For a small dog she packed a punch. I have seen her swing off the back of horses’ tails and Hell’s Angels’ jeans. A boy I really liked came round to see me at our house on Christmas day when I was 15. I took it to be a favourable sign of his interest. My dog saw it as an imposition and bit him so hard on his finger he lost his fingernail. He lost interest in me almost instantly!
She came off worse with two Irish Wolfhounds she attacked in their own garden and had to have 13 stitches. It didn’t deter her. There was only one person who wasn’t fair game for her. That was me. For me, she was the sweetest, most loving and loyal little dog I have ever known. She was my best friend for 17 years, through my teenage angst, family traumas and my early twenties. Friends came and went but she was steadfast till the end at the ripe old age of 17.
Given my love for her it might seem odd of me to compare her to a vile Red Fire Ant. Like me, the ant is not native to so strictly speaking it is called the Red Imported Fire Ant. (what do you call and ant from overseas? Important!) It has invaded from the south and is marching northward. It has colonized and hit . It causes all manner of damage to roads ($200 worth per ant caused ‘depression’ – a hole in the road where ant tunnels have caused it to cave in- in NC!) and chewed through electrical wiring! Red fire ants are the leading cause of traffic light shorts in , apparently, where they cause more than US$140 million in damage each year. (Remind me never to go to – I think I should migrate north ahead of the ants!)
They are feisty little f**kers, like my dear old dog. Happy never bit my dad but she saw him as a target for relentless torture. Apart from drinking his beer, when he mowed the lawn with his hover mower she seemed to take this as a personal affront and would attack the mower with everything she had. She did the same when he tried to ‘mop’ or sweep with a broom. She would latch on to the broom and not let go. You could swing her round and she would hold on, growling and tugging with all her might. Her teeth firmly attached and embedded. If she managed to get any purchase she would dig her heels in and treat it like a tug of war, jaws locked and snarling. She loved it and there was very little you could do to shake her off. She attached herself in much the same way, to a wooly hat my mom had on once!
I was reminded of my dog when we went to the beech this weekend. We were just leaving the beach house that boasted a glorious beach front view of the . (That was last year, before someone erected a 3 story beach house just in front of it! The owners had an ‘L-shaped’ plot and chose to build on the _ bit that had a 2 story house in front. They build a 3 story 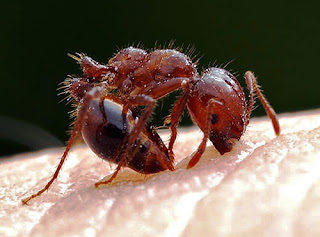 house and boasted glorious views… until the 2 story house grew a story! How silly when they could have built on the ‘l’ bit of the L.)  My daughter ran screaming back saying something had bitten her. That something was still attached to her foot. You could literally see it tugging with its little teeth- like a psychotic Jack Russell on the end of a broom. Teeth holding on while it stung her foot from its abdomen, up and down like a rampant rabbit. I did what I could never do to my dog. I squidged it.  It left a nasty welt on her foot.

I checked on line for suggested natural treatments for ant bites. Here are some of them, should you encounter an aggressive red fire ant:

While I saw the resemblance of my dog to fire ants in the instant I saw the little critter attacking my daughter she was not like the fire ant at all! Unlike Red Fire Ants, while really disliking small children, my dog rarely bit them. Unlike Red Fire Ants she caused minimal damage to farmland and livestock, spare the odd horse’s tail. She never chewed though electrical wiring, although she did her best to kill electrical appliances such as the hoover and mower. Unlike Red Fire Ants she never invaded the States but like any good redneck she would come out all guns blazing and would kill for a beer!

Posted by Stranger in a Strange Land at 10:30 PM

Email ThisBlogThis!Share to TwitterShare to FacebookShare to Pinterest
Labels: wildlife