Email ThisBlogThis!Share to TwitterShare to FacebookShare to Pinterest
Labels: drivers

My son came home last week with a special project called “Turkey in Disguise” for homework. He had an outline drawing of a and his task was to use any materials he wanted to, to disguise his . I didn’t quite understand why but assumed it was something to do with Thanksgiving which is the end of November. We disguised his as a Christmas tree with lots of glitter and sparkle. I say ‘we’ but he wasn’t allowed to participate. I liked the irony of disguising the Thanksgiving Turkey as a Christmas Turkey tree. Thanksgiving seems to steal all of the traditions of a British Christmas and put horrible gravy on it! 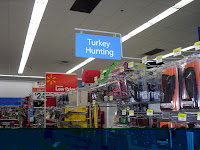 The completed turkeys are on display in the school hall. I am now wondering if the project has an extra dimension linked to a big local sport. hunting! It must be big; the local Wal-mart has a whole aisle dedicated to it. I took a photo of it because seeing is believing. I had to wait quite some time while a man in a lumberjack shirt and hunting cap stroked the merchandise… for a long time. Every time I went back to take a picture he was still there picking things up and putting them down again. I’ve seen women do that in dress shops, feeling the fabric but never in a hunting aisle in Wal-mart. I posted the picture on Facebook and people thought I had taken it off the internet. It was real! It was local. It is a tiny bit scary!
So – is the ‘ in Disguise’ project ‘training’ the kids to spot real ones out in the wild? I was going to do a bit of light research on hunting but it is serious stuff. Nothing light or humourous about Hunting…except just how seriously people can take it! There is a National Wild Turkey Federation of which has its own chapter… and the people who like hunting have guns and stroke stuff in the hunting aisle of Wal-mart. I should know when I am on dangerous ground. Besides there are some things I don’t want to know about , like male turkeys are called Gobblers and their red dangly bits are “‘major caruncles’ that are large and fleshy and engorged with blood during the spring.” I could have got by not knowing that. I disguised my son’s caruncles as blue icicles. That’ll stop any engorgement!
It is so serious that they hold special work shops to learn the call of a and have contests in the ‘off – season’.  I am a little bored – I wondered if I should go along to a workshop or two but I can’t see myself putting the acquired skill of sounding like a turkey to any practical use. You can learn to mimic the female to attract a gobbler- not something I would be keen to do with all those engorged dangly bits!
Listen to the sounds here: http://www.nwtf.org/all_about_turkeys/sounds_of_turkeys.html
You can buy all sorts of disguises, in this case to resemble a rather than disguise one! I bet you can even buy a special hat so that when you are lying in the grass doing your clucking, putting and cutting to attract the gobbler your head looks like the back end of a hen! Worry if you hear the ‘purr’ of a gobbler. You might need a new hat
I looked at the safety tips for hunting on the National Wild Turkey Federation website  http://www.nwtf.org/  How dangerous can it be? …well you would be surprised but it isn’t the that anyone needs to fear… 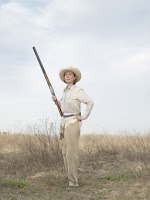 Here are some tips from the NWTF to consider when you're in the woods this fall:
I don’t think I will be engaging in any Turkey hunting during my stay in Texas but I am glad my son has learned some potentially life saving skills in his ‘Turkeys in Disguise’ project and I have again been reminded, when in America… ALWAYS stick to the path. There is some weird stuff going on out there! This Thanksgiving I will be notionally giving thanks to the ‘other’ aisle in Wal-mart – the one with pre hunted and plucked in the Freezer… if I can ever bring myself to eat again!
Posted by Stranger in a Strange Land at 11:32 AM 4 comments:

Dear United Airlines,
I’m not one to complain and I appreciate that merging with Continental is a tad bit confusing – I got sent away from the United check-in desk for my United flight from to and had to check in at Continental and then get on a United plane! Not confusing at all. A very smooth merger! One big team!
I don’t want to take sides but the Continental staff were very helpful. They fell for the ‘I don’t know how to self check-in, I’ve never done it before’ and did all that tedious crap for me which was good because my outward bound seat allocation had  not seated me with my children who are 9 and 6. Whilst this may have given me a peaceful flight, staff at check-in shared my concern that my children really did need to be sat with me on the flight for the peace and wellbeing of other passengers and for their own best interests. They relocated our seats without hesitation. The flight was full so changing seats was not without consequences for them to resolve at the gate with all those awkward miserable business travelers (I can’t call them twats because that is apparently very offensive in ! – Actually I think it might be offensive everywhere – just less used in the )  who expect to sit alone. It could have been worse. They could have had my son sat next to them!
The return journey wasn’t so good. I’m really not one to complain and I appreciate that in today’s climate of political correctness you have to have old, fat, ugly trolley dollies, I do! But do you have to have so many and do they have to be that mean? 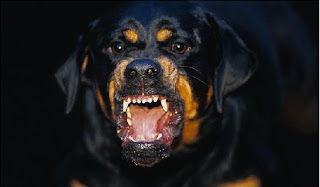 What’s the difference between a United air-stewardess and a rottweiler? Lipstick! 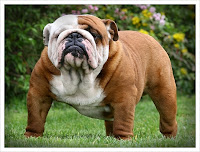 At check in, Bulldog #1 didn’t buy my ‘I’ve never used the self service check-in before, can you do it for me?’ and made me do it myself. The trouble with self check in is that lone travelers do not consider that passengers may want to sit together and take up single seats in the hope that they will be sitting alone. What they don’t particularly want is to find them selves sat with an unaccompanied 6 year old but that’s what they end up with by taking one seat up in every row. Passengers are not necessarily the best people to decide where best to sit.
I wasn’t anxious about the seating as it had been so efficiently sorted by continental staff – and you’re the same company aren’t you?  I was wrong.
Reality check #1:
At check in I was told by Very Fat bulldog #1 that I would have to ask for my seats to be reallocated at the gate.
Reality check #2:
At the gate I was told by Very Ugly Bulldog #2 that I would have to wait until I got on the plane. As all the platinum frequent flyer arses get on first, I was concerned that it would be too late once passengers were seated. I asked was there anything she could do to help me.  She said she could page the staff on board and ask them in advance but she was too busy… she didn’t seem that busy.  She seemed to be having a laugh and a chat with two other staff employed to tick the ‘politically correct’ employer box.
Reality check #3:
I pointed out that safety was the number one priority for airlines and that my 6 year old son’s safety would be compromised in the event of an emergency as I couldn’t expect a stranger to help him. She said at 6 his age was not a concern. I think she needed a reality check! I do not consider my son, at the age of 6, responsible. There was something more worrying than his safety in the event of an emergency. My real concern was that he would cause an emergency! He is a lively 6 year old! I pointed out that I could not be responsible for him if I was not sat next to him. She turned her back, walked through the gate and closed the door (I may have been ranting at this point) Still – she had told me they would sort it on the plane!
Reality check #4
Upon boarding Very Old Bulldog #3 told me to sit and they would sort it when everyone has boarded. Yeah, cos everyone is happy to move seats at that point! Boarded, belted and ready for take-off… That’s when she remembered to check (well – she was very old)!  She declared ‘oh good, you’re all sorted’. We were ‘all sorted’ and sat together because of the good sense (rather than an act of kindness I think) of the other passengers. They took one look at my son, unaccompanied, and next to them and immediately swapped seats until he was nowhere near them!
Maybe I was wrong earlier. Maybe passengers are the best people to decide where to sit.
So – United/Continental, I don’t know what your policy is on minors and where they sit but that isn’t really the issue.  The relevant point here is that you were mean to a passenger (me), anxious to sit next to her young son- for good reason! Next time I will not complain (because I’m not one to complain!). Next time I will let him sit where he is allocated and I will sit back and enjoy the experience. Next time I fly – it won’t be a 3 hour flight; it will be a 9+ hour flight. I’ve a feeling that my son, sat a distance from me,  is the best way to give the United staff a reality check on their customer service!
Posted by Stranger in a Strange Land at 11:43 AM 2 comments: