It's happened again! I have blogger's block! I don't write my blogs. I go into a zombie like trance and some time later I appear to have posted a blog with no idea how it got there. I can abdicate all responsibility for them! When I force them out they aren't funny (like yesterday's blog - just plain painful and tedious- although it was meant to be exactly that!) At the moment my head is full of material for blogs - I live in Texas FFS! I am bombarded with weirdness on a daily basis but the blogs seem to want to stay in the dark recesses of my brain - all warm and cosy! Maybe I am now so weird after living in the States for 18 months that the blogs prefer it in there! Maybe I should drink more... or drink less... to get the creative juices flowing. Maybe I need to have a fix of 'normality' in England to reconnect to blog world!
I am cheating today. It is tree putting up day today (I have so little to do I can dedicate whole days to such trivia) so I am reposting my blog from this time last year (maybe I had blogger's block that day too!) After completing this blog I received a GEM of an e-mail from i-neighbors in Cary NC on this very topic. I still subscribe even though I live in a different state because it amuses me on a daily basis! I have copied the i-neighbors email at the end:
Let there be light!

Sometimes it is easy to forget when you are a stranger in a strange land that it is the little things that are most weird. It is also those things that make you yearn for home.
I put my Christmas tree up. It is one of those snowy trees - cost a fortune and still look tacky next to real ones - but I like it.  Last year, in the UK, I bought some beautiful lights - Mistletoe leaves and the little white berries are the lights. They are still in the box!
Have you ever seen an American plug and plug hole? Again - for a nation so obsessed with dangerous killer germs (apple bobbers beware) they don't seem to consider the more highly likely possibility of getting electrocuted from their 3rd world standard plugs! They are two pronged affairs - there is an option for a third prong but it is rarely used. They don't appear to be fused. You have to have fit electrical surge protection as an extra to guard against frazzling your TV in thunder storms. Given the quantity and stunning quality of such storms it seems mad that they don't fuse their plugs. The holes you stick them in are just as bad. There is no switch so when you plug stuff in - if you do it at an angle you can have a mini light show from the sparks. That cant be safe! Thankfully my 5 year old son hasn't discovered this yet!
American visitors to my house LAUGH at any things I still have with a British plug attached. Yes - they are bulbous and ugly and often bigger than the device they power but they seem study and dependable. Most electrical goods from home don't work here. We got a couple of transformers to power the British Wii and TV for the kids and for my desk top but they are really expensive. We sold most of our electrical things before we came - There were some real winners on eBay! (See 'Take me home...') Can you believe someone would pay £360 for a 4 year old SMEG fridge??? A positive was selling the front loading washing machine and tumbler dryer and replacing them here for monstrous top loaders. They are fantastic!
We thought lamps would work. They don't - plugged in with an adapter plug they give off a feint glow and get mega hot!. That leaves us with a dilemma - buy nice lamps that you aren't ashamed of (other than their silly little plugs) or buy any old shit because they wont export back to Britain when we go home! We opted for the cheap stuff - Hubby is tight!
So it was with great sadness that I was prompted to reflect on strange little plugs when I came to put my tree up. My pretty little mistletoe lights wont work. It isn't that bad though - they don't seem to know what mistletoe is here (when I wrote this before I commented that mistletoe was a parasite and it was pointed out that it is symbiotic - it doesnt actually kill its host just goes and lives off it - rather like an ex-pat into a new country....) and the Christmas lights are very cheap. At home the occasional street has a house that is 'lit up like a Christmas tree' literally! you know - the very tacky ones that we all love but are glad they aren't living next door? Well here almost EVERY house is like that - and we aren't talking trailer trash chic! The bigger the house - the more lights and festive lit up figurines (more angels and Marys than Santas here given their tendencies). I guess my tasteful little berries would have looked as silly as their plugs! 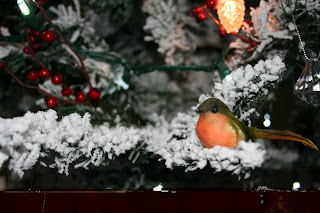 I do need to point out that in the intervening year, my attitude to American plugs has changed. I now like them. I like the fact that my plug is now smaller than my hairdryer. I like the fact that my camera battery charger is tiny....
Aye there's the rub! I am starting to accept the unacceptable as acceptable and no longer funny! Hence no funny blogs. I clearly find American lack of geographical knowledge and inane-ness acceptable now!
HELP!!! GET ME OUT OF HERE!

The i-neighbors email where a kindly neighbor has pposted an email to warn the other good folk of the neighborhood about plugs, fridges and Christmas lights!
After plugging some xmas lights this past week end, i woke up on Monday with the unpleasant realization that the one plug in the garage had been "triggered" to safety. The bad news is that it is the plug where my fridge was and lost all my frozen food. It was not the breaker in the fuse box that was triggered but the GFCI plug in the garage where the fridge is. I ONLY had the fridge plugged there, and it has worked great aince we moved in August, but this plug is also on the same circuit as the two outdoor plugs that i have used to plug my xmas lights.... And apparently it overloaded the whole circuit, thus triggering the plug in the garage.
I called (the builders) because I thought something was wrong with the wiring of the outside plugs, but no, she said:
You didn't choose the fridge dedicated outlet upgrade (meaning there would have been a single plug wired directly to the fuse box, then lowering the risk over loading to zero) and by plugging too much on the same circuit you tripped the circuit.
It becomes better:
This is A WELL KNOWN problem and i get this phone call EVERY YEAR from new home owners, at THIS TIME of the year for the SAME complaint.
So thanks very much for letting us know the risk
How about you fix it instead of collecting complaints?
Third, we didn't pick any upgrade when we bought because the house was completed when we bought it. Had I known there would be a risk, i would have check things and not overload the circuit...
So be warned neighbors, your fridge in your garage may be on the same circuit as the outdoor  plugs, and during these time of cheerful lights, you may lose your food.
Bitter, but enlightened!