I have been pondering what to do when I return to and I think I know what it is. I want to run this pitch by you before I run it by the banks. If you wish to invest in the venture feel free to send me money – but don’t expect freebies.

Concept:
A restaurant totally devoted to BACON! Trust me! Bacon is the new black!
Why? Everybody loves bacon, even vegetarians. Bacon is the food of the Gods…well, the Western gods at least!
Little did the Two Ronnies know when they did a silly parody of an ice-cream parlour where the customer confuses ice-cream flavours with potato crisp flavours that they were on to something. It took Heston Blumenthal to take up the mantle and transform smoky bacon ice-cream from a joke to a reality. If making ice-cream out of bacon infused milk makes him a culinary genius is the gastronomical capital of the world! Admittedly it has been done in already with Denny’s leading the way with ‘baconalia’ but I think the is ready for the import! Using the American take on Heston Blooming-mental’s concepts I have come up with some signature dishes, more ‘Fat F**K’ than ‘Fat Duck’.

Please note: all dishes are made with American bacon – think, crispy, fatty and smoked!

Bacon choc ice:
Inspired by Burger king’s Bacon Sundae which I thought looked a bit silly with two crispy rashers sticking out of the top of chocolate ice cream. Paying lip service really!
This will be layers of dreamy Bacon ice cream followed by bacon crumbles, sandwiched between two wafers and dipped in chocolate, topped with a sprinkling of bacon dust.

Bacon Smoothie
Inspired by Jack-in-the box (burger chain) bacon milkshake which could be heavily criticised for being made with bacon ‘flavoured’ syrup and containing no actual bacon, this ‘healthy option’ smoothie will combine a pound of real crispy bacon with a banana, fat free yogurt, a pinch of nutmeg and honey for a yum-a-licious breakfast treat of snack.

Bacon Triple burger kebab on a stick
Paula Deen (famous celebrity 'southern belle' cook here in the USA) made the donut burger famous, especially following her diagnosis of type 2 diabetes (the one fat people get).
I say if you are gonna do it, do it with bells on. This will be Paula’s burger and bacon, with fried egg slapped on, sandwiched between a sugar glazed donut with a twist. It with be held together on a kebab stick, dipped in batter and deep fried then smothered with gravy, cheese and bacon crumbles for the perfect topping. 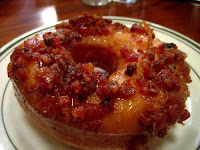 Bacon donut – a regular donut smothered in bacon crumbles
Bacon Taco: a taco shell made out of bacon and filled with …urm… bacon …and so on! Possibilities are endless!

All dishes will be nut free! Any nuts in the restaurant will be replaced with bacon crumbles!

Baconaise will be on every table. Baconaise is a bacon flavoured spread, used to ensure everything that isn’t bacon tastes like bacon!

Sides: All meals will be served with a side order of Lipitor
Lipitor is possibly ’s leading brand of atorvastatin, taken to reduce the risk of heart attack and stroke.
Décor will not be tacky and pig inspired! I’m thinking ‘Little house on the Prairie’: all red and white Gingham. Twee!
90% of what we taste is odour (I really don’t want to dwell on that thought given the things I’ve smelled!) and who can resist the smell of bacon? I’m hoping Yankee Candle will com on board with little bacon scented candles and big extractor fans blowing bacon smells into the street to lure in baconardos!

I am so excited about this bacon venture either I had a pre-emptive embolism or my heart just skipped a beat! Where’s the Lipitor!


if the link below doesn't work try http://www.youtube.com/watch?v=zv8yEMRDe_w or search 'Paula Deen's heart attack' on Youtube!

Posted by Stranger in a Strange Land at 5:22 PM

Email ThisBlogThis!Share to TwitterShare to FacebookShare to Pinterest
Labels: food