They say ignorance is bliss. That’s all well and good if you remain in blissful ignorance. Sometimes having your ignorance exposed can be enlightening or painful, or both!


I don’t like to write about anything personal for fear of ridicule, embarrassment or the likelihood of being sectioned. Some topics are a bit below the belt but luckily this happened to a friend, well below the belt! I’ll write in the first person though because it’s easier than writing about a friend and their friends, it gets confusing and I have a no naming, and in this case, shaming, policy.

Usually, in a colder climate you only have to worry about your bikini line on your fortnightly foreign holiday or for special occasions and rare visits from gentlemen callers but when you’ve got a swimming pool in your back garden you have to keep things more trimmed… Otherwise it frightens the children… and neighbours… and hummingbirds try to nest in the overspill. 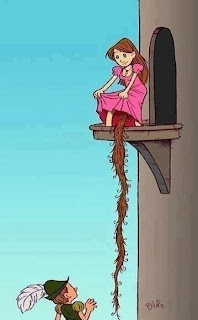 I simply had not realized until a girls’ night out in the UK that a mere trim was so 1980 and these days a full Brazilian was the order of the day. Initially I just thought the company that night was a bit risqué so I asked other friends. One friend stared in horror and disbelief when I shared the shock that the women I had been out with the night before all had shaven havens. I was relieved until it dawned on me that the horror was directed at me. I’ll never forget the derisory ‘You still have hair? There?’ She later emailed to tell me she had ‘totally’ (not just in passing, but totally!) thought of me when Cameron Diaz on the Graham Norton Show had described her friends 70’s style bush that floated like seaweed in the bath. I had thought the sway of ‘seaweed’ relaxing but I clearly needed to get with the times. Peer pressure succeeded where my husband’s begging had failed for years!
Upon my return to Texas I decided to investigate the Brazilian! I looked it up on the internet and once I removed the moderate filters I got a mass of fanny images that have scarred me for life! Having always kept my own under generous cover and having never watched a porn movie I had no idea they were that ugly! I can understand men trimming to make it look bigger but that’s the exact reason women shouldn’t! Who wants to see all that gubbins? (That’s a rhetorical question!). Perhaps dehairing isn’t enough of a makeover. Maybe adding a bit of bling and sparkle by vajazzling improves the over all appearance.
Not wanting to be ridiculed I decided to bite the bullet (not the little gold one from Ann Summers) and take the plunge, as it were! There are a few options for those, like me (remember its not me really, I’ve been bald for years!) who have never more than trimmed: You can wax, shave or use hair removing cream. I guess you could pluck or epilate if you were into self flagellation.


A good friend got me a leaflet for The Pretty Kitty, a waxing venue which boasted ‘The Brazilian is our specialty’. They said they ‘remove it all, front back and everything inbetween’. I wasn’t sure I was ready for such a drastic transformation but I was encouraged by the promise that ‘we never double dip our sticks’. No girl wants that! It said the pain was ‘tolerable’ and ‘freshly waxed skin may be tender for a couple of days’ and ‘skin may break out in tiny bumps’. I didn’t want to look bald and diseased but it was when they started talking about ingrowing hair that I really went off the idea! I had an ingrowing hair on my little finger once, all septic and sore! I did not want to add that prospect to the red tender lumpy welt the wax might leave behind! Waxing is not for the feint hearted and I was feeling decidedly feint!


Having trimmed, if not totally strimmed for years, I thought shaving might be ok but doing the back and everything inbetween with a razor seemed rather risky. Perhaps a combination of razor and hair removing cream for those difficult to reach bits is the way forward. 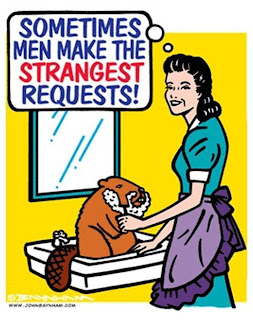 The funniest thing I have ever read is the Veet for men Hair removal cream reviews on Amazon. They are eye wateringly funny. I assumed the reason hair removal cream caused such eye watering pain on men was because, being men, they didn’t read the instructions. I read the instructions. I timed 6 minutes precisely. I only put it on the parts I couldn’t reach easily, or see, and I only put a tiny bit on! Lighting farts and removing bottom hair with the blow back would burn less than hair removal cream! One reviewer said, upon application of the removal cream, ‘At first there was a gentle warmth which in a matter of seconds was replaced by an intense burning and a feeling I can only describe as like being given a barbed wire wedgie by two people intent on hitting the ceiling with my head’. The reviews are spot on, when you put a spot on! Thank heavens I had Sudocrem (used for nappy rash and minor burns) to put on to ease the pain! The reviews did say however, the end results were completely hairless. My experience wasn’t so successful. It looked like Steptoe’s chin…. Gurning!


What my friends didn’t tell me was it becomes a full time job to keep it all in check. Regrowth is a nightmare. Sunday night bath time became a vital part of husbandry! The first time not blocking the plug hole with all the debris was a real challenge. At a certain length the stubble is spiky and itchy and I happen to think, in public places, a few stray hairs sticking out of your bikini is better than raking the constant regrowth itch!


Still, the end result of deforestation was appreciated and I was no longer a social outcast!

Moving to Sweden* presents new dilemmas. It is freezing! There is no pool. No skimpy bikinis. Do I need to bother with the upkeep? My hubby allows his habitual stubble to grow into a beard when he’s disaffected. Maybe I should do the same! Should I let the lady garden grow wild and free again? Unless I let it grow to my feet, where it can poke out of my thermal long johns, a sprouting pant moustache is no longer a problem. Also there is no bath. Getting yourself into a position to shave the harder to reach areas in a shower is much harder than in a bath and I aint never using hair removal cream there again! There are no humming birds threatening to make a nest! Oh… and did I mention, it’s cold? I’m sure the extra hair will help keep me warm! However, there is one important element that I need to remember, we have a sauna…Not sure if the neighbours call in for a social sauna. I’ve heard the Swedes are quite liberal. It might be embarrassing if I go into the sauna and someone thinks a small critter is hiding under my towel! Unless the Swedes are European in a German sort of way, I might have to continue something I wish I had never started!

*what are the chances of having a friend with a hairy Mary that lived in Texas and has now moved to Sweden! What a coincidence!


Posted by Stranger in a Strange Land at 2:15 PM