Messin' about on the water


I’m not sure if they are called barges or narrow boats but having traversed the Staffordshire and Worcestershire canal for a long weekend, I’ve a feeling, to the proper bargers (like members of the Caravan Club, only for barges - which are just like caravans on water!) , it matters a lot. We had numerous encounters with them en-route, provoking their wrath and derision in equal measures.

I had purchased a groupon making an eye wateringly expensive long weekend on a barge marginally less expensive. After they had added extras like bedding, insurance and doggy fees it became eye watering again with yet more eye watering from the numerous bruises sustained whilst trying to open locks. Still, I believed in the glossy brochure hype “Absorbing the riverside sights, guests can expect to soak in the relaxing countryside as well as visit the pubs and landmarks and meander the tow-paths along the way” Obviously I should have known exactly what they meant by ‘soak in the relaxing countryside’ but by some miraculous feat, none of us actually ended up in the cut like some weekenders we saw. There was nothing relaxing about it though.

We boarded the Dawn Star at dusk for a 3 night adventure. A lovely smiley Eastern European man guided us through all we needed to know about sailing a barge with advice like ‘phrob-lem? Phress’. We were clueless each time he said it what the problem may be and what to actually press, but we were in no doubt of the consequences if we didn’t. It was simple! ‘Sinky’

So we set off with high hopes and the no #2 rule already down the pan to our first lock. Luckily there was a ‘proper barger’ on hand. We didn’t know the lock etiquette of wherever the water level was, that barge had right of way. He had to wait upstream while we emptied the lock, got in, refilled it and sailed away with out closing it. Actually, he didn’t have to wait, he had to show me how to do it because I couldn’t work out ‘phroblem’ or what to ‘press’ but was fairly certain of ‘sinky’ if we f**ked it up!

At our second lock we learned you can’t just barge in! We had to reverse due to the lock already being occupied. Reverse a 40 ft barge FFS! We churned up a lot of silt and ended up widthways across the canal. Not good! I made good use of the long poles provided and poked frantically at the canal edge to get us facing the right direction. 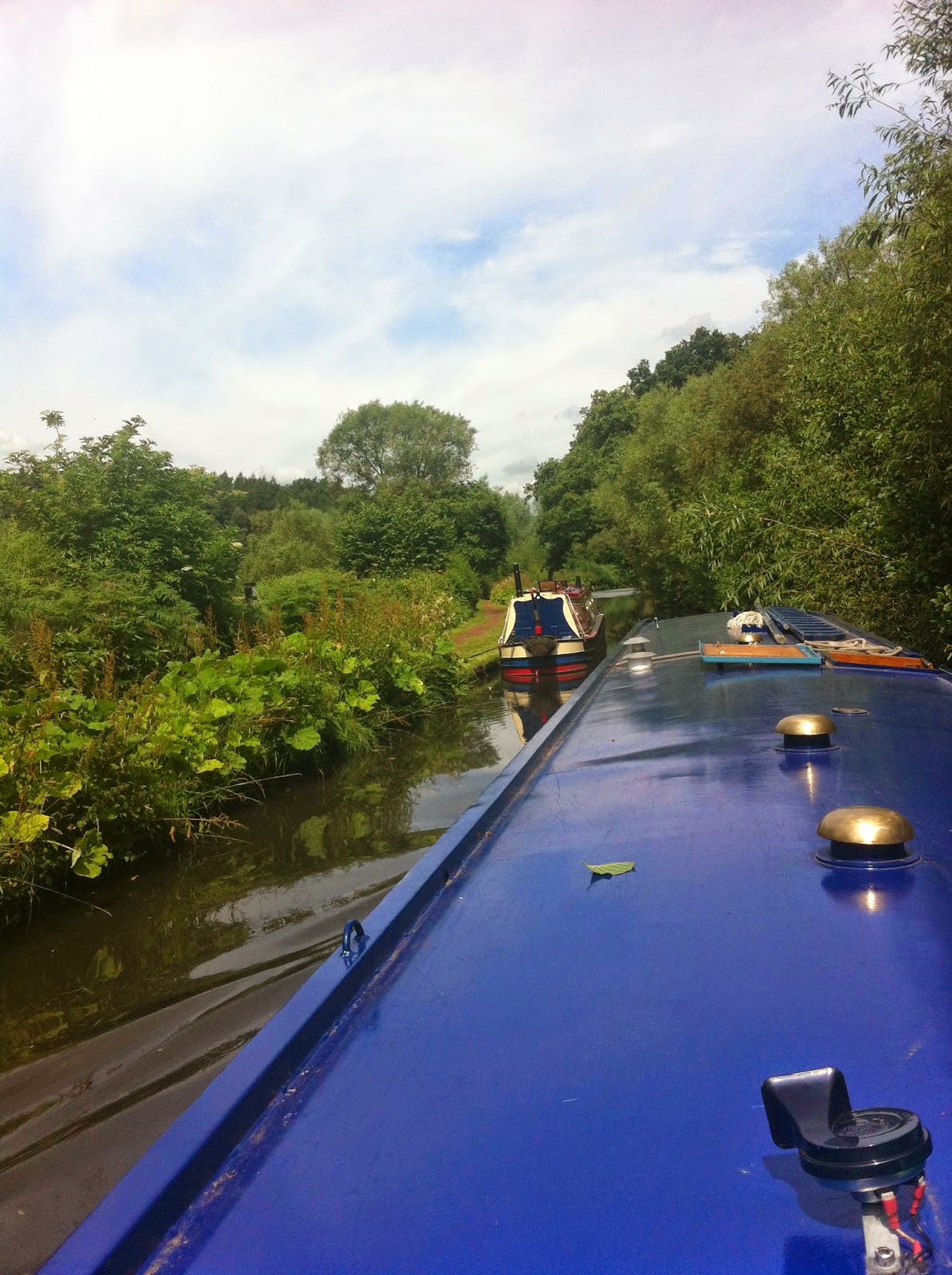 The blurb said the canal was ‘perhaps the most attractive canal in the country’. Perhaps! If you close your eyes all the way through Kidderminster and compare it to the Manchester ship canal. Everything is relative. We (I say we, I don’t know how exhausting standing and steering a barge is, but I know how hard lock duty is) were exhausted after 2 hours of barging and a trillion locks but had to plough ahead beyond the dusk curfew and beyond the Kidderminster ring road to park (do you park barges?). We asked some kids getting wasted sat on a lock near Wolverly if there was a pub nearby and decided at 8pm that it might be a nice (everything is relative!) place to stay! After Kidderminster, it seemed most welcoming!

I spent the night bobbing up and down, not in a good way! I still feel the motion now, after 24 hours on dry land. The blurb said ‘We allow well behaved pets for a small charge’ Well, my small badly behaved dog was on board for a hefty fee and I didn’t want him breaching the #2 rule so I was up at 6 am to take him to terrorise the tow path for his morning ablutions. Due to general anxiety of crashing a 40 ft barge, lock exhaustion, sea sickness, hideous mossie bites sustained sailing at dusk on a shitty canal, and anal retentiveness I had no such fear of breaking the #2 rule.

We were ready to set sail and we had a phrob-lem and no amount of button pressing sorted it. The batteries were utterly flat. We were told off by a proper barger for parking too close to a lock. We politely explained that we had broken down and would have been long gone if the boat would actually start. I’m sure you can imagine how polite and patient we were given her helpful observations! I had to physically tow the barge up the canal a short distance like a carthorse using the ropes while hubby supervised (he took serious advantage of my crap driving abilities!). I have rope burns to add to the physical witness of our trip.

An old work colleague and proper barger sailed effortlessly past (I don’t think barges sail but I’m just a weekender so I don’t know the proper terminology!). I think I may have encountered some gentle leg pulling for burning the midnight oil and using lights and fridge to drain the batteries. The worse thing was the fridge had stopped working and my wine was warm and the shower was freezing cold! It was beyond the press of a button. Two hours later, a loose wire reconnected and 3 new batteries (that should have been fitted the week before apparently) we set off again! To the nearest pub.

Some of us had #2’s. We had lunch and decided to sail until we could turn round and then go back to the pub. We went full steam ahead. We actually created waves. Impressive, as they only go about 5 miles an hour. How were we supposed to know you’re supposed to chug very slowly past moored barges? A rather aggressive reaction from one of the proper bargers made us aware of our indiscretion. The barges are very noisy so it was more the spirit of her gesticulation than the hurtful words that we got the gist of. Thankfully we didn’t tell her to f**k off (although we did laugh a lot) because at the next lock her husband was working on a barge and we got chatting to him. I told him someone short and ginger had told us off. He butted in, saying it was his wife, before I could finish my sentence! Thankfully! He said we could turn around after the next lock. Turn around! Have you seen how narrow canals are and how long 40ft barges are? We had been given some top turnaround tips from my proper barger friend (thank you x) but faced with the reality of doing it we were clueless! Sinky!

Going in to the lock we hit the edge. He and his fellow proper barger laughed a lot! I guess with his wife you get your joy where you can. Weekend hire bargers must provide an endless source of amusement to proper bargers. I bet they regale tales of woe about the city wankers wedged across the canal or leaving locks open or making waves and chuckle over their real ale in lock side pubs. As it happens they were so shocked at how shite we were at driving the barge that they helped us turn around with a simple but very effective use of ropes (like maypole dancing!) that would never have occurred to us and we’d still be there now, wedged! We were so impressed and grateful we slowed right down to a chug when we passed back by his wife and the row of moored barges. And we only hit one of them… briefly.

It was fun. It was an experience but it most certainly wasn’t relaxing! When we got back to the marina I was so relieved I didn’t even notice that the toilet on the dock was the one they had used to film trainspotting. The ground was swaying like mad but I managed to sit on the loo and drop anchor and finally relax for the first time in 4 days!


(in truth, the proper bargers were lovely and friendly and helpful! - but thats not as funny!)
Posted by Stranger in a Strange Land at 5:06 AM 6 comments: